Kim Kardashian is reportedly dating Kanye West after deciding to take their friendship to the next level. 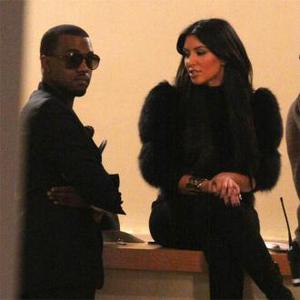 The 31-year-old reality TV star has decided to embark on a romance with the 34-year-old rapper after growing close to him over a number of years.

News of the pair's fledgling relationship comes just hours after Kanye's new track 'Theraflu' was revealed to contain lyrics in which he admits he ''fell in love'' with Kim while he was still dating Amber Rose.

A source told UsMagazine.com: ''They've been friends for years. Kim is ready to give it a try now ... She's been hanging out with Kanye a lot.''

The pair were spotted in New York on a date to the cinema to watch 'The Hunger Games' on Wednesday night (04.04.12).

On 'Theraflu' - which Kanye recorded with DJ Khaled - Kanye reveals his feelings for Kim and takes a swipe at her ex-husband Kris Humphries, who plays basketball for the New Jersey Jets which is part owned by the hip-hop star's friend and collaborator Jay-Z.

In the second verse, Kanye raps: ''I admit I fell in love with Kim / Around the same time she fell in love with him / Well that's cool baby girl / Do your thing / Lucky I ain't had Jay drop him from the team.''

In another couplet he addresses his ex-girlfriend model Amber, who is now engaged to rapper Wiz Khalifa.

Kanye rhymes: ''The whole industry wanna f**k ya old chick/ Only n***a I got respect for is Wiz.''

Earlier this year, model Amber accused the 'Keeping Up With The Kardashians' star of having an affair with Kanye before they split in 2010 while Kim was seeing NFL player REGGIE BUSH.

She said: ''She was sending pictures, and I was like, 'Kim, just stop. Don't be that person.' I thought at least she'd be woman enough to respond to me. She never responded.

''It's very important that us women stick together and we don't f**k each other over like that.

''But I want to thank her. Because if she was never a homewrecker, then I never would have met Wiz, and I wouldn't be as happy as I am now.''