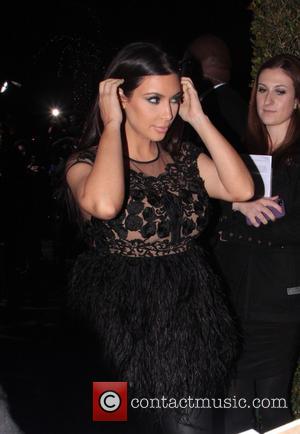 Chatting to E! News at the [email protected]’s Power of the Purse event yesterday (February 21, 2013), Kim Kardashian revealed that she does have a preference over the gender of her unborn baby. But she’s keeping her lips sealed, maybe until nearer the time. “I do (have a preference) but I don’t wanna talk about it,” she confessed, when she was pressed on the matter.

Talking with her mom Kris Jenner by her side, Kim also revealed that she’s starting to feel a little heavy. She smoothed down her monochrome shift dress so that her baby bump could be seen a little better and said “I feel good, I just feel a little heavy.” Those pregnancy cravings haven’t hit just yet though, she revealed. “I don't feel anything, I don't crave anything...nothing yet.” In fact, it sounds like the dream pregnancy so far as the reality TV queen hasn’t had any trouble sleeping, either. “I sleep amazing, it's like the best sleep ever. I'm a really easy sleeper though, you can put me on the couch with all these people in the room and say, 'You've got 10 minutes,' and I'll take an eight-minute nap.”

Kris also chipped in, saying that it was bringing back fond memories of her own pregnancies but added “I think she’s probably so sick of my advice by now.”