Is Kim Kardashian expecting a girl or a boy? 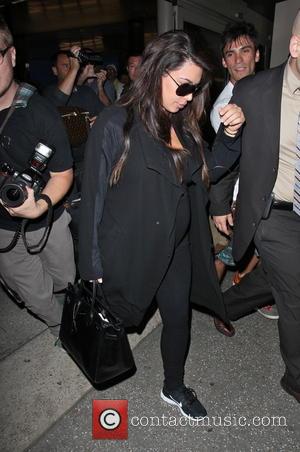 Picture: Kim Kardashian - A pregnant Kim Kardashian ditches the high heels for sneakers, as she arrives with her mother Kris Jenner at LAX airport -...

Kim Kardashian eventually managed to persuade partner Kanye West to appear on the baby shower episode of Keeping Up With The Kardashians after "begging" him relentlessly. Kanye has shied away from the Kadashian cameras, which have continued to roll throughout Kim's pregnancy, though he has agreed to make a small cameo on the show.

A source told gossip site Radar Online that Kim encouraged her beau "to stop by the baby shower," which will take place on June 2 and filmed for an episode of the family's E! show. "Kim nagged him until he agreed when she said it would look really bad if he didn't show up. Kanye thinks it's silly to even go to the baby shower since he will be the only man there. He will be there for less than ten minutes, tops. It was important to Kim that he go, so he agreed," said the insider.

Meanwhile, fans of the show have already been treated to seeing Kim visiting the doctor to find out the sex of her unborn baby. Despite keeping it a secret, a trailer for the new season features Kim's mum Kris Jenner saying, "Do you see a little pee-pee?" Sister Kourtney is selling tell her sister, "Once I knew the sex is when I got so excited".

What do you think? Are Kim Kardashian and Kanye West expecting a boy or a girl? Kim Kardashian Arriving At A Beauty Center In Los Angeles