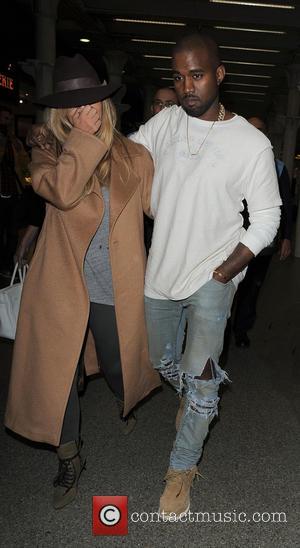 The latest episode of 'Keeping Up With The Kardashians' showed Kim Kardashian eventually persuaded to have a baby shower, but it wasn't without its tensions.

Kim was certainly not up for an attention-grabbing party with the media constantly scrutinising every move she made during the final weeks of her pregnancy with her first son, North. However, it wasn't long before mother Kris Jenner and sisters Khloe and Kourtney Kardashian managed to change her mind and the girls threw a garden baby shower with plenty of famous friends and baby gifts. Unfortunately, Khloe's husband Lamar Odom and Kourtney's partner Scott Disick messed things up by arriving earlier than they were asked to, ahead of baby-daddy Kanye West. Things weren't entirely spoiled though, and Kim certainly has a beautiful party to remember - but that night's episode certainly showed the cracks in Khloe and Lamar's marriage.

Kim and Kanye are clearly as tight as ever though, with the pair holding hands and hugging on their arrival at the Givenchy Spring/Summer 2014 show during Paris Fashion Week yesterday (September 29th 2013) - a much needed weekend together as Kanye faces charges for assaulting a photographer and breaking his camera and Kim is reportedly worried that he may be sent to prison for the offense.

Kanye recently made the headlines with his controversial interview with the BBC's Zane Lowe. In it, he labelled himself the 'biggest rockstar in the world' amidst a flurry of spurious claims. Kim and Kanye enjoy their time together before Kanye's court date