Kim Kardashian has shared pictures from her wedding to Kanye West on her Instagram page. 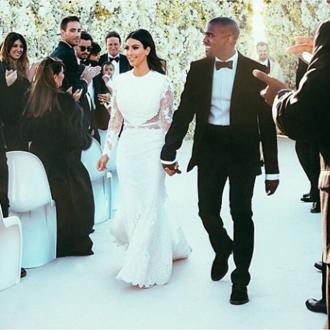 Kim Kardashian has shared pictures from her wedding.

The reality TV star posted two pictures of her marrying Kanye West at the Forte di Belvedere in Florence, Italy, at the weekend on her Instagram page.

In one shot he can be seen holding her hand as their guests clap the newlyweds, and in the other they are embraced in a kiss.

She simply captioned the pictures: ''Mr. and Mrs. Kanye West.''

After the ceremony, the happy couple and their wedding party enjoyed a lavish reception, which included a four-course meal and seven-tiered wedding cake.

Kanye gave a 20-minute speech, and both mother and father of the bride Kris and Bruce Jenner spoke to wish the couple well.

Kim and Kanye's first dance was to 'All of Me', which was performed live by their friend John Legend, who also raised a toast to them.

Kim's sister, Khloe, has also posted a picture from the event, of her gazing over the Italian skyline.

She captioned it: ''E vissero felici e contenti...'' which is Italian for ''And they lived happily ever after...''

Following their wedding celebrations - which started in Paris, France, last Friday (23.05.14) - the couple have now moved on to Ireland, where they are enjoying a honeymoon in Cork, Ireland, staying at the exclusive Castlemartyr Resort.