Kim Kardashian is getting in the Halloween spirit a week early, by showing off her favourite looks from the past 10 years.

With Halloween just a week away, Kim Kardashian is getting some inspiration for this year’s look by showing off all her favourite costumes from the past decade. On her website, kimkardashianwest.com, the reality star threw back to her favourite Halloween looks, including when she dressed as comic book characters, Poison Ivy and Wonder Woman.

"I LOVE Halloween. Every year on Halloween as a kid I would celebrate my birthday since my birthday is so close,” Kardashian wrote, in a post titled 'My Favourite Halloween Costumes'. Last year, the 35-year-old dressed as a skeleton, complete with a skin tight black bodysuit and spooky skull make-up.

More: The Stars Do Halloween 2014: From Katy Perry To Beyonce and Kim Kardashian Our Favourite Celeb Costumes

But this year, Kardashian will have to work her costume ideas around her growing baby bump. "I need to think of such a major costume for next year!” she continued. “This year, I am obviously limited but I think my favourite was Princess Jasmine and our Batman theme.” 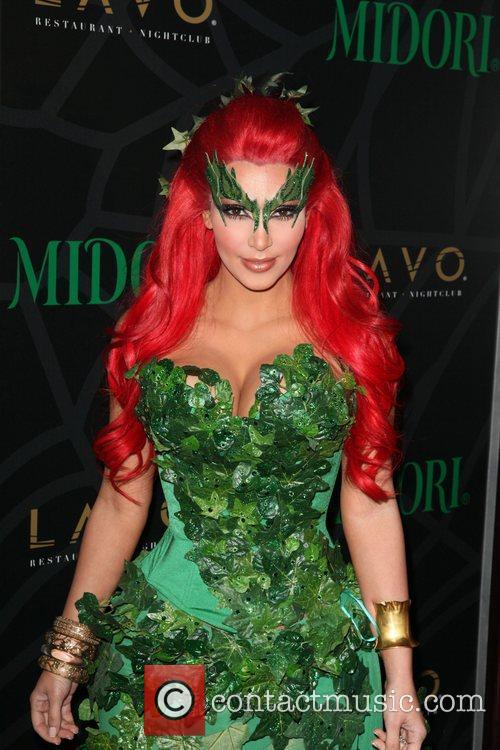 Kim Kardashian as Poison Ivy in 2011.

Kardashian dressed as Aladdin character Jasmine back in 2009, wearing a skimpy flesh-baring blue outfit that was a little more risqué than the one the princess wore in the animated Disney film. In 2011 she dressed as Batman villain Poison Ivy, with the whole Kardashian clan getting in on the caped crusader theme.

Reminiscing about the night, Kim wrote, "I love how all of my friends and family were different characters. We all drove Lambos to match our costumes: Kanye and I in a gold mirrored one, and Jonathan Cheban in a green one to match his Riddler costume!” Kim Kardashian as Wonder Woman in 2008

It wasn't the first time Kim had dressed as a comic book character, in 2008 she channeled Wonder Woman, donning the superhero’s famous America themed bodysuit and gold accessories.

More: Heidi Klum Gives A Sneak Peek Of Halloween Costume. Can You Guess What It Is Yet?

Other looks Kardashian has gone for over the past decade include, a blonde mermaid and a 1920’s style flapper. But now the question is, what does Kim have in store for us this Halloween? Well we’ve only got a week left before we find out. Kim Kardashian as a mermaid in 2012