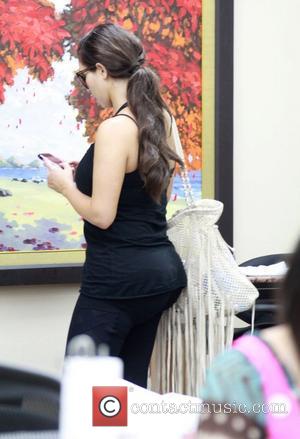 Picture: Kim Kardashian has a manicure at a Beverly Hills salon. Upon leaving, the socialite attempted to dodge the waiting photographers, telling them, No more pictures!...

Kim Kardashian is suing clothing store Old Navy and its parent company Gap Inc for using a woman who looks like her in their advertising campaigns. Kardashian filed the lawsuit in Los Angeles federal court on Wednesday (20th July 2011) alleging the company violated her publicity rights, reports the Associated Press.
An Old Navy commercial, titled 'Super C-U-t-e' began airing in February and has been viewed over two million times on the store's YouTube channel. The dark haired model in question, Melissa Molinaro, has since risen to prominence and is allegedly dating Kardashian's ex-boyfriend REGGIE BUSH. Kim's lawyers claim consumers may be confused by the commercials and falsely assume the reality star is representing the brand, stating she had "invested substantial time, energy, finances and entrepreneurial effort in developing her considerable professional and commercial achievements and success". A spokeswoman for Gap said the company had not received the case and had no comment. In a post on her Twitter page, Molinaro said, "Were still talking about this.Some people have too much time on (their) hands".
The television star's lawsuit specifically seeks damaged and wants a federal judge to prevent Old Navy from using a 'lookalike' model in its future advertising campaigns. Kardashian is scheduled to marry her fiance Kris Humphries in a ceremony on 20th August 2011.