Kim Kardashian West is happy to help Bruce Jenner look and feel his best as a woman - but doesn't want him to steal her glam team. 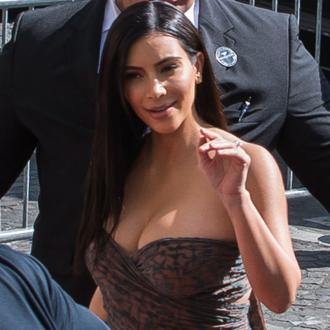 Kim Kardashian West has warned Bruce Jenner not to ''steal'' her glam team.

The 'Keeping Up with the Kardashians' star is more than happy to help her stepfather with his new look as he transitions to a woman, but she doesn't want him taking away the hair and beauty experts she uses every day for her glamorous look.

She said: ''I said, 'The only thing is, whatever you do, do not steal my glam team.' There's too many girls in this family!

''I said, 'Whatever help you need, you need to look and feel your best, and if you need anything, style-wise, glam-wise, I'm here to help you.''

The 34-year-old beauty - who has 22-month-old daughter North with husband Kanye West - says Bruce is doing ''really well'' since his revealing interview with Diane Sawyer aired last week and he is thrilled by the support he has received since opening up about his transition.

Speaking on 'Jimmy Kimmel Live!', she said: ''Bruce is doing really well. He's so happy. I think it's the sense of the relief from all of the amazing support he's felt.

''It's a really brave thing to come out and be so truthful, and to have all of that support meant the world to him, and our family.''

During his interview, Bruce admitted Kim had been the ''most accepting'' of his decision to transition.

And he said she told him: ''You're representing the family. You gotta look really good.''