Kim Kardashian West has wished her daughter a happy birthday 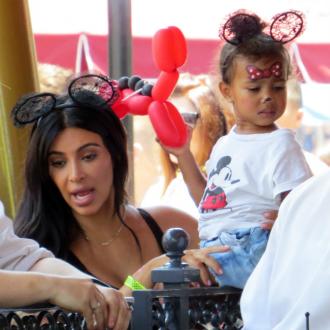 The 34-year-old reality star took to Twitter to celebrate the second birthday of her and husband Kanye West's daughter on Monday (15.06.15), after spending the day at Disneyland in Anaheim, California.

She wrote: ''Happy birthday to my sweetest Minnie Mouse! Thank you Disneyland for the most amazing day! (sic)''

The couple and North were joined by family members Kourtney Kardashian and Kendall and Kylie Jenner at the theme park, with the latter also bringing her rapper boyfriend and his son King Cairo, also two.

After meeting at the Big Thunder Ranch Jamboree, the party enjoyed various rides including a spin on a carousel, before meeting for a birthday lunch at which balloons spelled out the youngster's name.

Kim - who is currently pregnant with the couple's second child - banned guests from bringing gifts for North, but treated them to passes allowing them to skip the park's queues.

The bash followed rumours the couple had attempted to hire out the entire park in a bid to throw the perfect party.

However, a Disneyland spokesperson denied the claims, saying: ''Disneyland will be open on June 15 as a regular business day.

''Although we don't comment on private visits, private parties are not uncommon here.''