Kim Kardashian West left a $300 tip for her $200 lunch when dining in New Orleans with friends earlier this week. 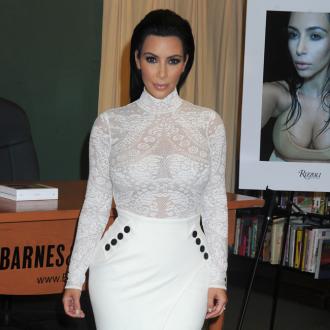 The pregnant 'Keeping Up with the Kardashians' star - who is married to Kanye West - dined at Brennan's in New Orleans with a group of friends and gave the generous amount to staff in recognition of the service they received for their $200 meal.

According to TMZ, Kim - who already has two-year-old daughter North with Kanye - was being filmed for her reality show in the restaurant.

The 34-year-old star tucked into eggs and french toast, while her best friend Jonathan Cheban ordered turtle soup. The group were reportedly shocked it was made from ''real turtles'', but it still got eaten.

Kim isn't the only celebrity to leave a generous tip lately.

Amy Schumer left a $500 tip for a student working at Peter's Clam Bar in Long Island, New York, despite her bill only coming to $49.

The 'Trainwreck' star reportedly opted to leave the generous sum after an ''engaging, animated conversation with her server, Ryan''.

During the course of their conversation, Ryan explained that he was ''a college student working two jobs to fund his education'' and so Amy decided to be particularly kind when it came to paying the bill.

The 49-year-old actor treated his dentist, Dr. Kevin Sands, and pals, comic Jon Lovitz and actor Darius McCrary, to a meal at Café Roma in Beverly Hills, and he was so impressed with the work carried out on his gnashers that he splashed out an extra 200 per cent of his bill.

Charlie's bill already had a $115 tip written on it but the former 'Two and a Half Men' star left the waiter ''shocked'' with his generosity.

An eyewitness explained: ''[The waiter was] shocked upon reading the receipt, as the total read $2,000.

''Charlie said it was no mistake ... even though a tip was already included.''