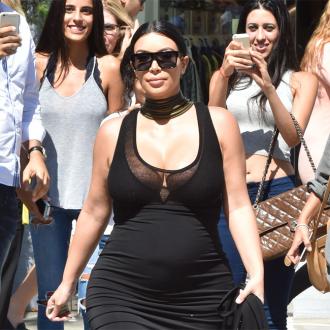 The reality TV star has two-year-old daughter North West with her hip-hop star husband Kanye - and is currently pregnant with her second child - has revealed the emotional roller coaster she endured during and after the birth.

She said: ''I couldn't help it, and everyone would say, 'She can't stop eating.' I delivered at 180, and they were like, 'She's 210 pounds. She's getting dumped because she's too fat' and all these ridiculous stories.

''It really took a toll after the fact, when I was losing weight.

''I gained 50 pounds, and it's tough to get it off. I was dedicated, but also, it changed the way I viewed wanting my picture taken.''

Kim said the pregnancy caused her to be less accommodating to photographers.

She said in an interview with C magazine: ''Before I was always smiling, and so into being out and about. After I had the baby, I was like, these are the same people that made fun of me, and posted the stories that were so awful, calling me fat for something I couldn't control. I don't want to smile for them. I don't want to be out.

''Even if I was more confident, I just didn't feel like being that girl who was going to be smiling for every photo. It changed my mood; it changed who I was; it changed my personality a lot.''