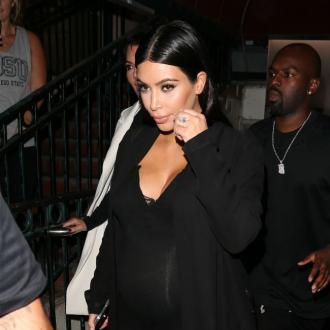 Kim Kardashian West has reportedly been tested for the BRCA1 gene.

The 34-year-old reality TV star, who is set to give birth to a baby boy in December and already has two-year-old daughter North with husband Kanye West, travelled to a Pathway Genomics clinic in San Diego, California with younger sister Khloé Kardashian, 31, and their mother, Kris Jenner, 59, yesterday (22.09.15) to undergo blood tests to see if they are carriers of the genetic cancerous gene, which increases the risks of developing breast and ovarian cancers.

A source told gossip website TMZ.com that the 'Keeping up with the Kardashians' stars were also tested for heart disease and diabetes after their fellow E! reality TV star Dr. Paul Nassif from the series 'Botched' and Kris' boyfriend Corey Gamble accompanied them to the clinic.

The trio were also filming scenes for an upcoming episode of their show and they later visited Kris' mother Mary Jo Shannon, who lives in the area, before having dinner at La Jolla's George's At the Cove, according to PEOPLE.com.

Kim and Khloé's late father Robert Kardashian died from esophageal cancer in 2003 and they have also been open about their cousin Cici Bussey's lengthy battle with the disease in the past.

Oscar winner Angelina Jolie famously underwent a preventative double mastectomy in 2013 and removed her ovaries and fallopian tubes earlier this year after a simple blood test revealed she carried a mutation in the BRCA1 gene.