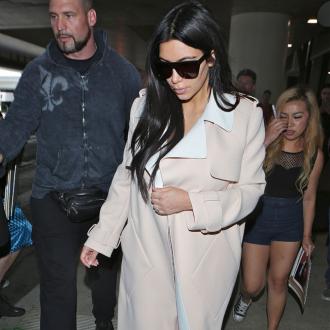 The 'Keeping Up with the Kardashians' star admits her younger brother, 28, feels ''uncomfortable being on the show'' since gaining more than 100 pounds over the past two years, but insists his struggles are ''not that mysterious.''

Asked about Rob, who has reportedly also been battling depression, the 34-year-old beauty said: ''It's not that mysterious, what's happening with Rob. He has gained weight. He feels uncomfortable being on the show, and that's OK. Do I think he smokes weed, drinks beer, hangs out and plays video games with his friends all day long? Yes.''

Meanwhile, Kim admits she was nervous about asking her step-parent Caitlyn Jenner, who was known as Bruce Jenner before undergoing gender transition earlier this year, to walk her down at the aisle at her wedding to Kanye West in Italy in May 2014, but her rapper husband convinced her it was the right thing to do.

She told Rolling Stone magazine: ''I wasn't sure if Bruce was going to be comfortable walking me down the aisle. He had just had his trachea shaved, so I knew something was going on.

''[Kanye] obviously moves to his own drum. He lives his life the way he wants, a really authentic life, and he was like, 'If you can't be authentic and you can't live your life, what do you have?' ''