Kim Kardashian Wishes She Was Dating

Kim Kardashian enjoys reading about her love life because it sounds more exciting than it is in reality. 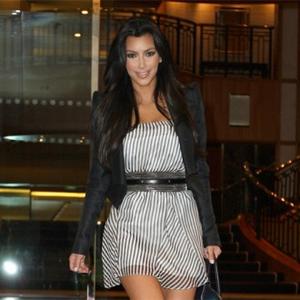 The sexy socialite - who has been single since splitting from Dallas Cowboys football player Miles Austin in September - laughs when she sees herself linked to a new hunk in the media because her love life is far from exciting at the moment.

She said in an interview with WWD: "There's a lot of speculation. I think I'm dating like 10 people right now. I wish it was all true. I wish I was having that much fun."

If Kim does meet a guy she likes she doesn't plan to rush into things and doesn't want to Expose a new man to the pressures of her celebrity lifestyle.

The 30-year-old star - who appears in fly-on-the-wall show 'Keeping Up with the Kardashians' with her sisters Khloe and Kourtney and their mother Kris Jenner - added: "I've realised it's really hard to date when you live your life on a reality show. So I think this time around I'm just taking everything extremely slow. I'm trying to not really dive into anything because I just don't have the time. And I feel like now is the only time when I can be completely selfish and I don't really have any personal responsibilities as far as having a husband, and having kids. And I'm a workaholic, so it works."