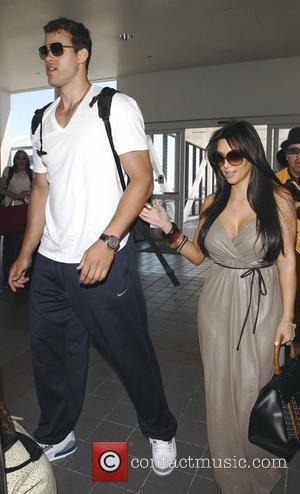 Picture: Petite Kim Kardashian is dwarfed by new husband Kris Humphries as they arrive at LAX to fly out to New York. The couple are heading...

Kim Kardashian married New Jersey Nets star Kris Humphries in Montecito, California, on Saturday (20th August 2011) and the basketball player has already been tagged with a new nickname by pals, reports the New York Post.
Nba friends of Humphries have bizarrely dubbed him "Kate Middleton", after the new Duchess of Cambridge and wife of Prince William. The moniker is reportedly an attempt to "razz him" for getting "married into royalty". Having wrapped up their lavish nuptials, attended by some 400 guests, the famous couple jetted off for their European honeymoon before they settle down in New York City. They were snapped at Los Angeles Airport as they boarded a flight to Paris, and are reportedly headed to Capri, Italy. On arrival back into the United States, Kardashian and Humphries will receive a second wedding reception on 31st August 2011, thrown by Niche Media founder Jason Binn and party planner Colin Cowie. Guests at Saturday's bash included Lindsay Lohan, television star Ryan Seacrest, former Spice Girl Mel B, actress Eva Longoria and Ciara.
The celebrity packed event didn't go ahead without controversy - noise complaints from neighbours drew fire marshals to the bash and the party was halted around 12 a.m.