Kim Richards Checks In And Out Of Rehab 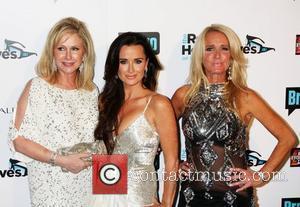 Kim Richards, the 46-year-old socialite and star of 'The Real Housewives of Beverly Hills', was checked into rehab by her family after they accused her of having a drinking problem, reports the New York Daily News. The events unfolded during last night's (20th January 2011) 'Real Housewives' season finale during which Richards got into a drunken argument with her sister Kyle.
In an explosive final episode, the housewives were seen celebrating the birthday of co-star TAYLOR ARMSTRONG when Kim and Kyle began to argue about a previous disagreement they had in New York. Their bickering became more heated and soon turned into a war of words in the back of a limousine. Kyle branded her sister "delusional and demented" before screaming, "You are a liar ... and you are an alcoholic! Yeah, that's right. I've said it now, and everybody knows". As the episode came to its conclusion, an on-screen message revealed that Kim's family had checked her into rehab shortly after filming had finished but that the 46-year-old had checked herself out a week later and that the sisters had not spoken since.
Kim, a former child star who appeared as the daughter of James Brolin's character in the 1977 movie 'The Car', is the aunt of socialite PARIS HILTON.