Kimberley Walsh is 'in love' with baby son

New parents Kimberley Walsh and her partner Justin Scott are ''totally in love'' with their baby son Bobby, who she gave birth to last week. 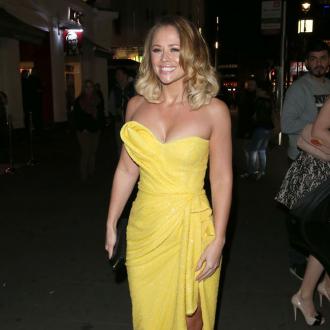 Kimberley Walsh is ''totally in love'' with her new baby son.

The former Girls Aloud singer gave birth to Bobby - her first child with long-term partner Justin Scott - last week and although she is still a bit ''shell-shocked'' about being a mum she is besotted with the tot.

Writing in her OK! column, Kimberley revealed: ''Bobby and I are both doing well and Justin and I are totally in love with him - I can't stop staring at him! Like most new mums, I feel a bit shell-shocked, but Justin's being an amazing support and fortunately feeding is going well so far.''

Kimberley admits it was a ''nice surprise'' to have a boy because most of her friends and family thought she was carrying a girl.

She added: ''Bobby is a name Justin and I decided on a little while ago. A lot of people thought I was having a girl, so it was a nice surprise to have a boy.''

Kimberley was amused when she delivered Bobby on her exact due date because she is always so punctual in her life.

The 32-year-old singer admitted: ''My friends had joked that the baby would arrive on time because I'm so punctual, and he did! I went into labour last Wednesday, September 3, and gave birth at 4:52 pm the next day - September 4 - which was my due date. Justin was by my side during the birth, as we'd planned, and it was brilliant to have him there.''

The new issue of OK! magazine is out now.