Review of Vows Album by Kimbra

Following the success of the over-played Gotye track on which Kimbra featured, New Zealand born vocalist Kimbra Lee Johnson's own musical endeavours are not quite as cohesive and consistent - as Vows, a confusing and hit and miss album of multiple musical personalities, proves... 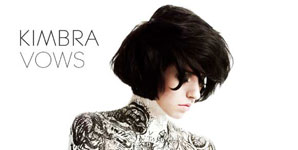 'Settle Down' opens with multi-tracked rhythmic vocals accompanying Kimbra's luscious soulful vocal melody, later with gentle suggestions of tabla and bass. The track builds with clapping before the rhythmic percussive accompaniment kicks in, then eventually piano and bass. The blend sounds something akin to the eclectic sound of Guillemots, and the vocal style bares many similarities to Bjork. The drum opening of 'Something In The Way You Are' places emphasis on rhythmic accompaniment rather than chordal, which really highlights its melody and Kimbra's smooth, sexy, whispered vocal tone. With its synth chords and electronic beat, 'Cameo Lover' initially offers a different kind of sound, nodding to the likes of Frankmusik, though soon returns to the familiar, soulful pop vibe previously suggested, complete with pounding snare and shaking tambourine. So far, nothing stands out.

Through to the Sade-esque 'Two Way Street', there's already a feeling of meandering songwriting that's not really memorable. 'Old Flame' contrasts low sultry vocal over moody low-pitched synths during the verses with a higher pitched chorus backed by held synth strings chords; during the second verse, however, the snare is irritatingly strong and dominant, and though the track starts off promising with a moody and atmospheric vibe, the chorus is whiney and, once again, meandering.

Towards the middle of the album, there's a glimmer of hope after a disappointing start; 'Good Intent', a double bass-accompanied number, has a funky Latin vibe; jazzy, soulful and sexy sounding akin to the likes of Caro Emerald, Amy Winehouse and Paloma Faith. Suggestions of muted trumpet also add to the vibe. Later, 'Come Into My Head' has a funky R&B feel underpinned by baritone saxophone; it's an infectious, toe-tapping groove complete with brass backings. In contrast, 'Plain Gold Ring (Live)' is a performance of a track by George Stone; using a loop station, Kimbra performs with a multi-tracked vocal accompaniment to her melody. The instrumentation of this track is, once again, minimal (merely guitar and percussion) which offers her soulful vocal space to ooze. Kimbra's vocal acrobatics around the melody puts a distinctive and individual stamp on the track, particularly clear during the conclusion to the track when the full band join in and the accompaniment builds beneath Kimbra's improvisation.

In the closing tracks of the album, there are yet more changes of musical personality to be heard; 'Sally I Can See You' has hints of Kate Bush and Saint Saviour/i> with its more electronic accompaniment, whilst both the independent attitude and musical style of 'Posse' nods to Marina & The Diamonds. Then there's the rather disjointed, stop-start 'Home' with synths, bass and electronic beats dropping in and out and the back to the eighties sounding, synth-clad, disco-pop blend of bonus track 'Warrior 'sandwiching, almost hiding, the probable highlight of the album, 'The Build Up', which offers a snippet of a different culture in its instrumentation. Slow and gentle vocals ooze effortlessly over a sparse accompaniment before the chorus builds in contrast, moving and string backed.

There are glimmers of hope and promise on Vows, they're just tucked away towards the album's close, and the overall impression is someone trying to do and show too much and, in the process, not sounding particularly memorable. A disappointing, inconsistent debut.