Before Kings Of Leon set the world alight with Sex On Fire the Followill's had a number one album with their third full length release, Because Of The Times.

Having formed in 1999, Kings Of Leon went on to release their debut album, Youth & Young Manhood in 2003, but it was in April 2007 when they released their third full length record that they truly started to find success. The three Followill brothers and one Followill cousin had already experienced plenty of praise, respect and critical acclaim for their music as the 21st century began to unfold but it was Because Of The Times that raised the bar . The quartet from Nashville, Tennessee initially found success, not in their homeland, but more so in the UK. The band's first two album's both made the UK top five; Because Of The Times however beat them both and was their first to go to the top of the charts. 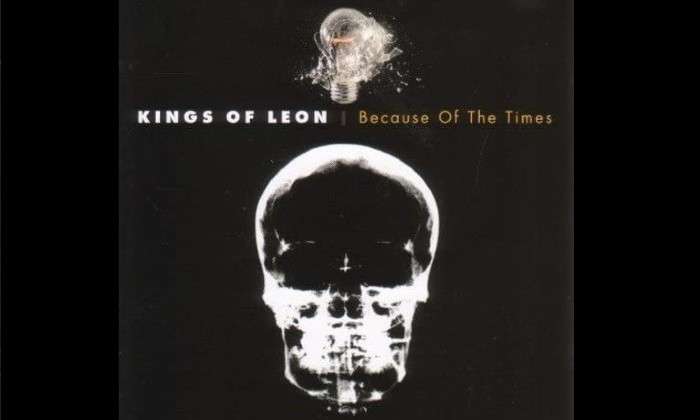 Looking back it's easy to misremember and possibly site Sex On Fire as a pivotal turning point for the US band, but the turning point came a year ahead of that. Because The Night did more than just lay the ground work for what was to come, it cemented the growing reputation of Kings Of Leon as one of the most exciting and dynamic Rock bands in the world. Whilst KOL's third album may have divided the critics when it was released it has undoubtedly stood the test of time, and is, arguably, one of their best albums to date.

The thirteen tracks that make up Because Of The Times gave rise to three singles, the first of which, On Call, was released just ahead of the album on March 26th. The typically phrased KOL track is a signature tune of the band. The slack vocal delivery, walking bass line, tight percussion and building soundtrack constituted a great advert for the album to come and topped out at number 18 on the UK singles charts.

The second single, released in the July of the same year, was not an altogether different prospect to it's predecessor but it did position the band in a wholly different light. Whilst Fans too embraced a Rock ethos it also saw KOL present a lighter, more delicate and refined sound allowing them to explore another musical thread. Fans was more harmonic and used an arrangement that didn't rely entirely on a wall of sound, in fact the breakdown in 'Fans' is where one of it's greatest qualities lays. This was a more obviously immediate and commercial track, a clear choice for a single and now a clear fan favourite.

The third and final single from Because Of The Times was album's second track, Charmer. The succinct, heavy hitter highlighted to those who may not have sampled the delights of the album just what a range of sound KOL were capable of. 'Charmer', especially after hearing the previous single Fans, is akin to listening to Blur's Song 2 after hearing Coffee & TV. The stark contrast in styles is what makes the entire album such an exciting and interesting record.

From the epic, 7m10s, introductory opening of Knocked Up through to the mildly melancholic reflection of True Love Way, the raw and bluesy, almost breezy, Black Thumbnail and the electrified intensity of the scuzzy Camaro, KOL twist and tweak their sound throughout Because Of The Times. The song writing ability of the Followill four had undoubtedly reached another level by the time they came to record this, their third album, in 2006. The collection of songs that the band arrived with, coupled with great musicianship and an ability to transfer their ideas into a coherent and vital record make for an album full of character and class.