Kings Of Leon - On Call Video 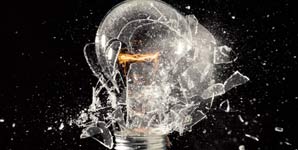 It's not business as usual on the Nashville-based quartet's ambitious, eclectic new album Because Of The Times. Where Kings of Leon's last release, 2005's Aha Shake Heartbreak, packed with emphatic two-minute bursts of raunchy guitars, brawny drums, and growled vocals, Because Of The Times finds the Followills (brothers Nathan, Caleb, and Jared, and their first cousin Matthew) opening up, relaxing the rules, and reveling in the joys of their newfound musical freedom.

"We took the limitations off of ourselves," says frontman/rhythm guitarist Caleb. "We went into the studio with an open mind, thinking let's do whatever it takes to get these songs to the next level. Because we really have a lot of music inside of us and a lot of different places we can go." Instead of resting on their rep, the guys chose to challenge themselves. "We weren't scared to try anything," Nathan says. "I think that's the difference between this album and the last. We weren't timid at all. Every song showed us something we had inside of ourselves that we didn't know existed, which enabled us to be even bolder on the next song."

To that end, Because Of The Times (the title refers to an annual preachers' conference the boys attended growing up) contains Kings of Leon's first-ever album track that clocks in at longer than five minutes ("Knocked Up"), the first song with vocal effects ("On Call"), and the first one you could verifiably call an arena-rock anthem ("Black Thumbnail"). Then there's the breakneck "McFearless," the chiming "Ragoo," the scuzzy "Charmer," and the waltzing "The Runner" a song so pretty, it's damn near a lullaby. "I can sing pretty if I want to sing pretty," says Caleb, whose slurry Southern cadences were once a hallmark of the band's sound. To shepherd them through the process, the Followills turned to their long-time producers Ethan Johns (Ryan Adams, Ben Kweller) and Angelo Patraglia.

"On the last night of the Dylan tour," Caleb says, "Dylan came into our dressing room and he says [here Caleb affects Dylan's husky rasp:] 'What's that last song you guys played' And I said, 'Uh, it's called 'Trani' [a little ditty about transvestite hookers from the first album]. And Dylan goes, 'That's a hell of a song.' "I think that was pretty much the biggest thrill of my entire life."

So where does one go from there On tour, of course. "That's our thing," Nathan says. "We're a live band, that's our bread and butter. We like to get up there and put on a good show. We start rehearsing tomorrow and I'm sure we'll be kicking ourselves in the ass for recording such hard album parts that we're going to have to play live every night." He pauses, then says brightly: "But I'm going to have some huge arm and leg muscles and a bare chest!"

Kings Of Leon - Use Somebody...