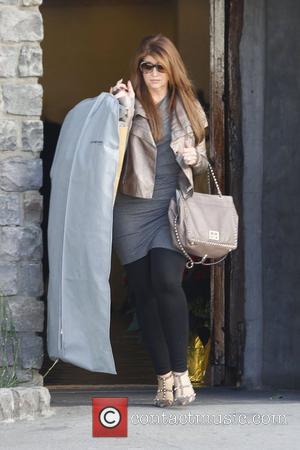 Former Cheers star Kirstie Alley has pocketed $1,000 (£625) after getting through a TV interview without touching her hair.
The actress combats her nerves on chat shows by brushing back her hair and twirling strands and the habit has become a talking point for family members and friends, who have urged her to stop.
Appearing on The Ellen DeGeneres Show in America - her first TV chat of the New Year - on Friday (06Jan12), Alley sat on her hands and told the host, "I always touch my hair in interviews... and so I have a $1,000 bet that I won't touch my hair more than twice. I have two touches."
DeGeneres showed her guest images of her touching her hair in TV interviews and Alley admitted it has become a very bad habit.
She explained, "A friend of mine counted once that I touched my hair 26 times in one interview... I'm neurotic; when I laugh... I laugh and flick."
The actress, who won the bet, also sported her new look on the show, revealing she has had to darken her locks to play an Italian-American woman in a new TV show.