Game Of Thrones Director David Nutter Has Confirmed He Killed Off Another Of The Show's Leading Men After Kit Harington's Character Jon Snow Appeared To Be Slaughtered During The Latest Season Finale, Which Aired In America On Sunday Night (14jun15). 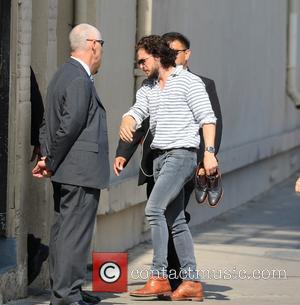 As fans of the cult fantasy series come to terms with the shocking storylines in the episode, many of which are not featured in George R. R. Martin's Game of Thrones book series, the man charged with directing the finale has urged devotees not to hold out any hope for the return of Harington's popular character.

Fans watched as Jon Snow, the Lord Commander of Castle Black, was stabbed to death by his own men, and Nutter insists, "Jon Snow is dead!"

But he admits filming Harrington's final scene was tough, telling The Hollywood Reporter, "He is a consummate professional... You really grow quite fond of each other. You're family. It was a lot of sadness on the set.

"The guys on the crew knew Kit really well, and people who are extras - the members of the Night's Watch, they take this very seriously. They have clubs and they have get-togethers. These guys have to look like that 24/7, 12 months a year. They live the part so much.

"I took all of the extras aside prior to shooting the sequence and we read the Night's Watch creed together, because I wanted them to feel like they are part of it. Without them being involved, it wouldn't have worked as well. I wanted the scene to happen rather quickly, where it didn't hang at all. That it would happen before you know it."

Game of Thrones superfan Octavia Spencer was among the millions stunned by Snow's quick exit - she took to Twitter.com as the credits rolled and asked, "What just happened? #GoT", while actress Tamera Mowry-Housley added, "Oh Lawd! The game of thrones ending gave me heartburn and acid reflux."