Posted in Press Releases on 04 February 2014 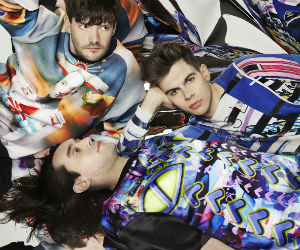 "This record is very much about the present, an emotionally honest album about technological and personal progression." Jamie Reynolds.

Klaxons are pleased to announce details of their first single for 2014. 'No Other Time' paves the way for the bands third studio album due for release late spring.

And what an opening to the year it is - not only is it classic Klaxons at their best, it's also a collaboration with one of the most exciting dance-pop duos making some serious waves already this year - Gorgon City, who's current single 'Ready For Your Love' feat MNEK' entered the UK single charts at #4 on Sunday.

'There Is No Other Time' will receive its worldwide exclusive play as Zane Lowe's Hottest Record in the World TONIGHT at 7:30pm on BBC Radio 1.

The track will be live on the bands SoundCloud at 7:35pm tonight.

'There Is No Other Time' and the subsequent new album marks the return of Klaxons since 'Surfing the Void' (2010), which in turn was the follow up to their Mercury Music Prize winning debut album 'Myths of the Near Future' in 2007.

The new album also sees the band work with Tom Rowlands of the Chemical Brothers, Erol Alkan and James Murphy.

Further news of the new album & live shows for 2014 to follow.