Kourtney Kardashian has confirmed she's pregnant with her third child with partner Scott Disick and admits the baby was unplanned. 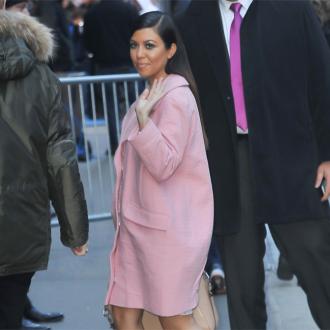 Kourtney Kardashian has confirmed she's pregnant and admits the baby was unplanned.

The reality star and her long-term partner Scott Disick, who have children Mason, four, and Penelope, 23 months, are expecting their third child together in December.

Kourtney confirmed she is expecting during a premiere episode of 'Keeping Up With The Kardashians' on E! last night (08.0.14), which saw the brunette beauty, 35, tell Scott the exciting news.

The announcement was saved for the end of the episode in a montage of clips showing viewers what would be coming up on the reality show later on in the season.

The star is currently filming the spin-off show 'Kourtney & Khloe Take The Hamptons' with sister Khloe Kardashian and their mother and other sister Kim had both teased fans that the pregnancy rumours would be discussed on Sunday's show.

Kim wrote on Twitter: ''Kourtney will also be addressing pregnancy rumours this Sunday on our premiere!,'' adding ''So be sure to tune in! #keepingupwiththeKardashians. (sic)''

Kourtney and Scott, 31, have been together since 2007 and their famously tempestuous romance is publicly documented on the Kardashian family's numerous reality shows.

Us Weekly broke the news that Kourtney is expecting her third child last week and a source claimed she wants to have ''a handful of kids.''

The insider said the star was ''only a few months along'' and has abstained from drinking since finding out the news.