Kourtney Kardashian is determined to lose 14lbs after giving birth to her third child Reign in December. 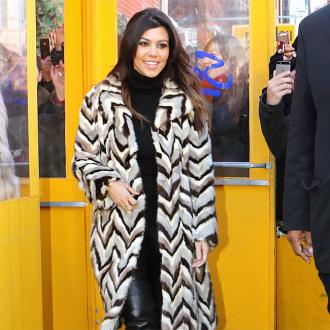 The 'Keeping Up With the Kardashians' star has sprung back into shape after giving birth to her third child Reign on December 14, but she insists she's still got some extra baby weight to shed.

Taking to her Instagram account today (12.02.15), she posted a photograph of her running trainers before her workout and captioned it: ''14 stubborn pounds to go. Let's go! (sic).''

A source said last month: ''Scott hasn't been happy for a long time. But it's taken 'til now to realise that everyone would be better off if they weren't together anymore.''

Scott, 31, is also feeling like the ''naughty kid who's been kicked out'', after Kourtney's love for attachment parenting has meant that the two eldest children now sleep in the bedroom with her.

Speculation that the couple are considering a split comes as no surprise to some fans as the pair, who have been dating since 2006, have had a turbulent relationship over the years due to Scott's highly-publicised wild partying and alcohol addiction.