The 31 year-old partied in The Hamptons for his belated birthday celebrations, while Kourtney Kardashian was at their Los Angeles home, hosting North West's first birthday bash. 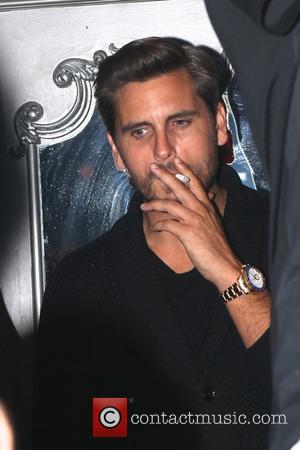 Picture: Scott Disick - Gumball 3000 party at Up and Down club. Scott Disick was drinking, smoking and rapping on the microphone - New York, New...

On Saturday (June 21st), Scott Disick was nowhere to be seen as his partner, Kourtney Kardashian, hosted North West's 1st birthday bash at their home in Calabasas, Calif.

Instead the reality TV star was partying hard at 1Oak nightclub in The Hamptons for his belated birthday celebrations, In Touch reports.

"The reality star arrived with his entourage of male friends at 12:30 a.m. and an E! TV camera followed them into the crowded nightclub," an attendee told the magazine.

Disick even reserved an area for himself and a group of friends, which included a very attractive brunette.

"Being with his friends from Long Island it was as if he was reverting to the behavior of a teenager and didn't seem to have a care in the world," the eyewitness added, noting that he was "showering the crowd with dollar bills."

The 31 year-old didn't leave the venue until 4 a.m., and he didn't seem to spare no expense as he was seen spraying the partygoers with "a bottle of Veuve Cliquot" champagne.

The news of Scott snubbing North West's first birthday comes only days after he was reportedly thrown out of the Kardashian family's rented $14 million estate in the Hamptons on June 14th, due to his partying ways.

"Kourtney was yelling at Scott after she found an inappropriate picture of him with another girl," a source close to the pair revealed.

Despite recently learning that the couple of 8 years are expecting their third child together, Disick hasn't seemed to slow down his wild side.

"You need to be a more responsible father and get better," Kourtney shouted, while confronting him on the property's driveway, according to the insider. "There is another baby on the way! You need to straighten up or get out!" Disick partying in The Hamptons