Kris Jenner has wished Jennifer Lawrence a happy birthday with a strange message and photo on Instagram, six days after the star turned 25. 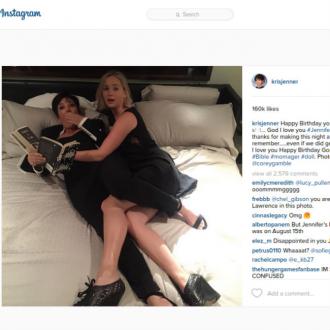 The 'Hunger Games' actress celebrated her 25th birthday last Saturday (15.08.15), but the 'Keeping Up with the Kardashians' star has only just got around to posting a tribute in which she called the blonde beauty a ''s**t'', uploading a strange photo on Instagram showing them lying on a bed together reading.

Alongside the quirky image, she wrote: ''Happy Birthday you piece of s**t... God I love you #Jenniferlawrencethanks for making this night a night to remember.....even if we did get caught... I love you Happy Birthday Gorgeous!!!#Bible #momager #doll. Photo [email protected] (sic).''

The pair - who have a 34-year age gap - were not thought to be pals, although Jennifer has repeatedly spoken about how much she loves the 59-year-old TV personality's show, which is currently in its 10th season.

Speaking about partying, she previously joked: ''After it's 11, I'm like, 'Don't these kids ever get tired?' When I'm out, I think about my couch. Like, 'It would be awesome to be on it right now. I bet there's an episode of 'Dance Moms' on. Am I missing a new episode of 'Keeping Up with the Kardashians'?'''

And Kim Kardashian West revealed earlier this year she was even confronted by the actress who confessed her love for the show to her.

Recalling their encounter, she said: ''We said, 'Hi' and walked into the elevator and as the doors were closing, she screamed across the lobby, 'I love your show!' We were laughing so hard.''