Ryan Seacrest believes the Kardashian and Jenner family have ''universal'' appeal because of their strong sense of family. 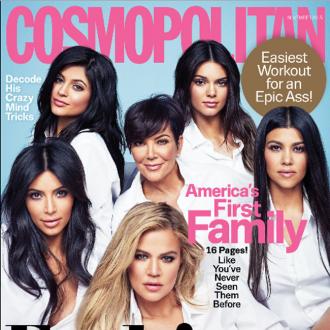 The 40-year-old star - who executive produces 'Keeping Up With the Kardashians' - admits the show depicts something ''glamorous and crazy'' and not like the lives of most viewers, but thinks their strong bond is something everyone can relate to.

He said: ''No one could have predicted the Kardashians' and Jenners' success. But when you spend time with them, what resonates is the family unit. There are so many things about them that are glamorous, crazy, and unlike our lives, but the sense of family is universal. They love and stand by one another no matter what.''

And Ryan thinks the show provides ''comfort'' to viewers because of the family unit between matriarch Kris Jenner, her former spouse Caitlyn - who was previously known as Bruce - their daughters Kendall and Kylie Jenner, and Kris' children Kim Kardashian West and Khloe, Kourtney and Rob Kardashian.

Speaking to the new issue of America's Cosmopolitan magazine - which features Kris, Kendall, Kylie, Kim, Khloe and Kourtney on the cover - he added: ''Their unvarnished candour reveals how close they really are. What's more, they present acceptance. You look at Bruce and now Caitlyn -- you see the power of a family to come together when it would be so easy to fall apart. There's comfort in viewing that steadfastness of love.''​