Kristen Stewart told a paparazzi photographer he didn't ''deserve to breathe the same air'' during a foul-mouthed rant in Los Angeles yesterday (30.07.13). 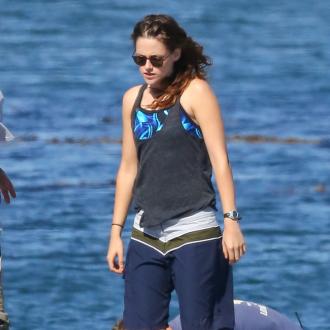 Kristen Stewart told a paparazzo ''you don't deserve to breathe the same air'' during a foul-mouthed rant.

The 'Twilight Saga' star flew into a rage at the photographer on as she walked her dog in Los Angeles on Tuesday (30.07.13).

In footage of the incident, Kristen is seen hiding behind garbage bins outside an office building, waiting for her car to arrive.

After she finally emerged, the 23-year-old actress reached boiling point.

In video footage obtained by TMZ, the paparazzo is heard asking: ''Why are you saying f**k off?''

Kristen - who is walking away from the snapper - replies: ''Because you're a piece of s**t and you don't deserve to breathe the same air I do.''

According to X17 online, she then called the photographer a ''f**k face'' after he asked her about her about her ex-boyfriend Robert Pattinson.

Kristen four-year romance with Robert ended in May, after the actor dumped her for being back in contact with 'Snow White and The Huntsman' director Rupert Sanders - who she admitted having an affair with.