Kristen Stewart enjoyed a night at Hooters in Texas over the weekend, where she happily posed for pictures with fans and employees. 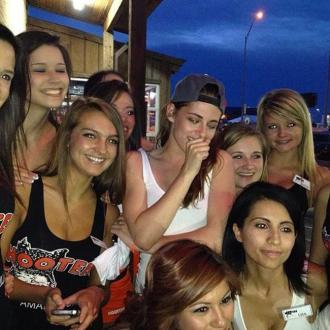 Kristen Stewart enjoyed a night at Hooters in Texas.

The 'Twilight Saga' beauty dined at the chain restaurant - which is famous for its busty waitresses - over the weekend and although she tried to keep a low profile, Kristen, 23, was happy to pose for pictures with employees and fans.

''She was really nice, she smiled and said bye before she left.''

Kristen isn't the only celebrity fan of the eatery, Selena Gomez previously revealed her father used to take her to Hooters with him when she was younger.

She explained: ''When I was seven, my dad would go to Hooters to watch Spurs games. But he started noticing that when I would come, with my little pigtails, all the waitresses would be like, 'Hey!' So he ended up half spending time with me but with all those cute girls coming over.''