Kristen Stewart is disappointed that a scene in which her 'Twilight' character Bella Swan gives birth to a vampire baby isn't as ''grotesque'' as in the book. 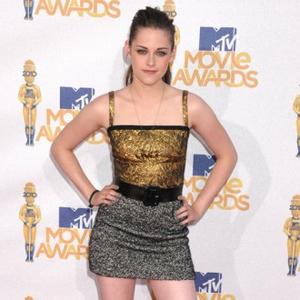 The 21-year-old actress - who plays Bella Swan in 'The Twilight Saga' films - has revealed that she is disappointed that a traumatic birth scene she filmed isn't more "shocking".

In the fourth instalment of the popular fantasy book series, Bella conceives with her vampire boyfriend Edward Cullen, leading to an agonising labour when their daughter Renesmee is born.

However Kristen says the film's portrayal of the plot development is toned down to make it more suitable for younger audiences and she is disappointed that she didn't get to "puke up blood".

She said: "The birth is really effective, and I've heard it really hits you in the face. But what it could have been? It could have been shocking and grotesque, because that's how it was written in the book. I would have loved to have been puking up blood."

Also toned down was Kristen's sex scene with her on-and-off-screen boyfriend Robert Pattinson - who plays Edward - which the actress says is more romantic than in the book.

She told Entertainment Weekly: "It's funny because when [the PG-13 issue] comes up, everybody thinks it's all about the sex.

"It feels like a real love scene, not necessarily vampire-y, which is good."