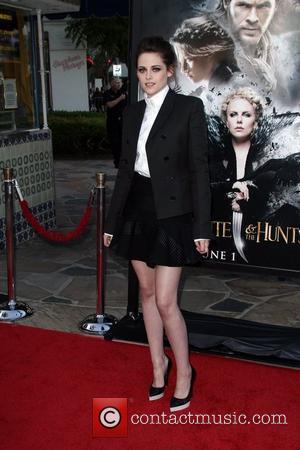 Somewhat surprisingly, given what several critics regarded as a put-offish title, there are only a handful of negative reviews for Snow White and the Huntsman , starring Kristen Stewart and Chris Hemsworth in the title roles. One of them comes from Linda Barnard in the Toronto Star , who writes that "director Rupert Sanders makes all the mistakes of a neophyte filmmaker, but doing it with such a massive budget leads to a cinematic hodgepodge of fractured fairy-tale imagery, computer-generated menacing forests and gamboling, turtle-riding fairies." But all of that stuff is what most other critics find quite enchanting. Betsy Sharkey in the Los Angeles Times praises Sanders's "brilliantly inventive debut" and says that all that CG imagery "is an absolute wonder to watch." It is, she adds, "a movie that is built from the ground up for maximum visual impact." A.O. Scott in The New York Times refers to "episodes of enchantment that feel fresh even to eyes that have seen everything under the digital sun." Likewise, Joe Morgenstern in the Wall Street Journal praises Sanders as "a whiz at visual storytelling." Stephen Rea in the Philadelphia Inquirer applauds it as "a surprisingly fine fantastic movie." And Roger Ebert in the Chicago Sun-Times is clearly stunned by his own enjoyment of the movie. "There is a great film here somewhere, perhaps one that allowed greater complexity for the characters," he writes. "But considering that I walked in expecting no complexity at all, let alone the visual wonderments, Snow White and the Huntsman is a considerable experience."