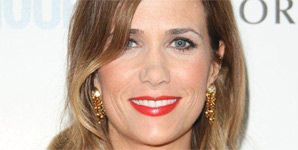 Kristen Wiig is one of those comedy actresses you recognise without remembering her name. She's had hilarious roles in a range of films from Knocked Up to Whip It to Date Night, and most recently as Simon Pegg's leading lady in Paul. She originally rose to fame in America after joining the Saturday Night Live television ensemble in 2005. And her obscurity is about to end with her starring role in this summer's break-out hit Bridesmaids, which she also co-wrote and co-produced.

This script took a long time to develop. Was that a difficult process?
Kristen Wiig: Not really. It was all very collaborative; there was never anyone telling someone else what to do. No one said, "You have to take this out." Paul Feig [the director] is extremely generous. And then when the cast came along, it was the same thing. We all just wanted to feel comfortable playing our characters, and we encouraged improvising. Annie Mumolo [her co-writer] and I didn't swear by every word in the script; we had so many funny improvisers, so we wanted to use them.

Were there any personal wedding experiences that ended up in the script?
Kristen Wiig: Thankfully not much that was in the movie has happened to me in real life. If anything, there are a few touches in there that my writing partner had happen to her. But the wedding shower party was really fun for us to write. We knew we had to have this over-the-top shower, so what are we going to do? Swans walking by! And there's bunnies! And then we thought of puppies, because it's a really bad gift to give someone without asking them first. And now they have to go and take care of it, because now they have a dog.

Did you use any other wedding movies for inspiration?
Kristen Wiig: When we were writing it, we really didn't think about any of the other movies. I think that could put you in your head a little bit, so you'd be trying to avoid this thing or asking, "Is this like that movie?" We didn't go out of our way to watch any movies. We just wanted to keep to what we wanted to write.

How was filming the bedroom scenes with Mad Men hunk Jon Hamm?
Kristen Wiig: I want to say, "Oh, it was fun!" But then I sound like a big perv. But it was really fun! I think we laughed through the whole thing. Our director made me laugh, the way he was shouting out things for Jon to do to me. We couldn't write everything out on paper, so it was really like, "Now what can he do?"