The 40 year-old actress will re-team with her 'Bridesmaids' co-writer, Annie Mumolo, to star and produce the new flick as well. 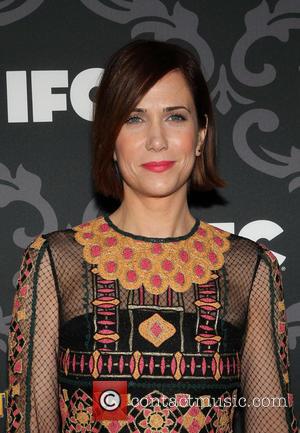 Kristen Wiig will be taking her first ever role behind the camera for Tom Rothman's TriStar Productions.

As well as making her directorial debut, the 40 year-old actress will also be reteaming with her 'Bridesmaids' co-screenwriter, Annie Mumolo, to produce and star in the new project.

"We're very excited to be writing," the two women said in a statement. "We will be going into a cave for months to finish. An actual cave. We found one that's nice and big. We're putting a couch in there."

"I've been wanting to direct for some time now. This seems like the perfect first project," Wiig also said to the New York Times.

The upcoming flick will be set in Vista Del Mar, and will follow two "best friends who find themselves in over their heads and out of their depths," with hilarity expected to proceed throughout.

Thomas E. Rothman, TriStar's chairman, joking quipped to the Times, "Kristen and Annie assured me that the film will be a searing and depressing drama, which is what the world needs right now."

Wiig, a 'Saturday Night Live' alum, and Mumolo garnered worldwide fame after the release of 2011's 'Bridesmaids,' the pair's first script earned them a nomination for Best Original Screenplay at the Oscars.

The comedy was also a commercial success, made with a budget of $32.5 million, it went on to earn $288.4 million at the box office.

Rothman recognises the women's achievement in breaking down barriers in a male-dominated industry, especially in the genre of comedy. "Everybody talks about it needing to change, but Kristen actually wants to do something about it," he added.

MORE: Kristen Wiig worried she was too old for Hollywood

Despite being so successful in their first writing partnership, they decided to wait to collaborate once again because they "wanted it to be the right time and the right idea, and both of those elements have come together."

No official release date has yet been issued. Wiig will make her directorial debut in the upcoming flick