Actress Kristen Wiig Was Once Forced To Move Out Of Her Own Apartment Because She No Longer Felt Safe Around Her Mentally "Unstable" Neighbour. 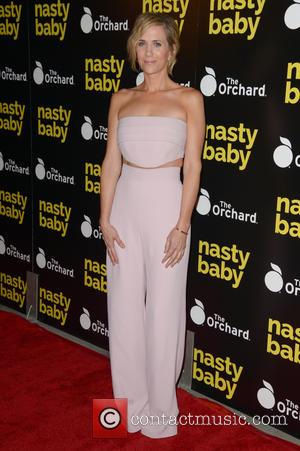 The Bridesmaids star reveals she could relate to scenes in her new film, Nasty Baby, in which her character endures a number of nasty confrontations with a next-door neighbour, because she lived through a similar experience herself.

However, even now, Kristen is hesitant to go into too much detail about her own period of terror.

"It's like, so scary that I'm afraid to talk about it," she tells Eonline.com. "It was like a scary. I mean, I had to move. Yeah, he was just an unstable person. I wasn't safe being in my apartment. But I moved, and everything was fine."

The disturbed neighbour in the film, played by House of Cards actor Reg E. Cathey, is actually based on a resident co-star and director Sebastian Silva once encountered in his native Chile.

Nasty Baby features Kristen as a woman desperately trying to become a mother with the help of her gay best friend and his boyfriend.