Kristin Cavallari is trying to bulk up after giving birth to her sons, Camden, two, and eight-month-old Jaxon , with her husband Jay Cutler, as she worries she looks too skinny. 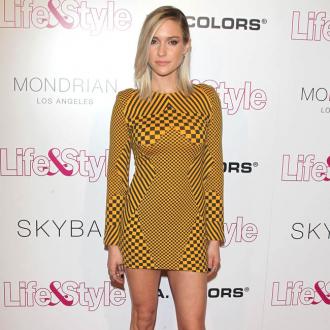 The former 'The Hills' star has revealed she is trying to bulk up after giving birth to her sons, Camden, two, and eight-month-old Jaxon, with her husband Jay Cutler, as she doesn't like looking too skinny.

She said: ''I don't know why or how but after I had children my body literally changed and now, for me, it's about trying to keep muscle on so I don't look too thin.

''Because it's very easy, especially because I have no curves, that I can look really skinny and I don't like that look.''

The blonde beauty, 28, insists there is ''no secret'' to her impressive figure and tries to ''workout four to five times a week'' and stick to an ''incredibly healthy'' diet in order to stay in shape.

She told E! News: ''There's no real secret, I work my butt off in the gym...[but] I'm trying to gain some muscle so I've been working out with really heavy weights...and then I drink a protein shake right afterwards.''

Kristin is also helped by her NFL quarterback husband, 31, who is always giving her ''workout tips.''

She said: ''He helps with giving me certain moves. Like I want to make my butt bigger so he's telling me what to do.''