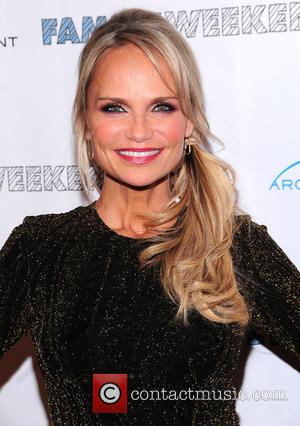 Animal-loving actress Kristin Chenoweth is selling special T-shirts to help raise money for Oklahoma families and their pets in the aftermath of the state's deadly tornado on Monday (20May13).

The Pushing Daisies star, an Oklahoma native, is offering the Lending a Helping Paw shirts for $25 (£16) through her animal charity Maddie's Corner, which she named after her beloved dog Maddie.

Chenoweth's goal is to sell 1,000 shirts to generate more than $17,500 (£11,290), which she will donate to pets in need of medical attention after the natural disaster, which ripped through the town of Moore, wiping out entire streets and claiming 24 lives.

A post on the organisation's website states, "Maddie is a little dog but right now she's got her paws wrapped around her mama's home state of Oklahoma in a big hug of love and support following the devastating tornado. So many lives, both human and animal, were torn apart...

"We are going to do whatever we can to help those affected by the tornado to recover and rebuild. We will be sending food, building supplies, medical supplies and veterinarians, if needed. We want to see everyone reunited with lost pets and help families to heal and care for themselves during this difficult time. Let's rally together... for good!"

The T-shirt, which features the outline of Oklahoma and illustrations of a cat and dog, is also available for pets.