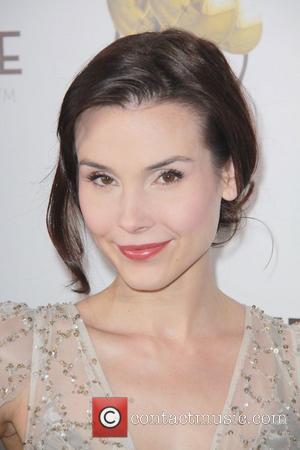 The actress, who plays fairy Maurella in the vampire drama, portrays a writer/director on the hunt for real spooks in the new film - and she found one while relaxing between takes.

She tells Wenn, "The winery that we shot at is said to be haunted for real... We were filming in an old house on the property and I was feeling really tired whenever I was in this house. I couldn't understand why. While they were doing one of the set-ups (preparing), I went into one of the bedrooms that wasn't being used to lay down.

I felt like I was floating and I looked around and I did see the golden outline of a female and I started communicating telepathically. It was all super-positive. She was upset that people were in her place and she moved about the room and I said, 'Why don't you just stay in here. They're (members of the film crew) not in here.'"

Anapau was shaken out of her other-worldly chat by her call to return to the set, but before she got back to acting she asked a prop guy to help her confirm the presence of a ghost.

She adds, "We had ghost monitors on set that measure electro-magnetic frequencies and I said to the prop guy, 'Are they real or are they just props?' He said they were real and I said, 'Bring one in here a second,' and we stood in the doorway and it was at zero and I said, 'Let's walk over there...' to where I saw the outline, and the thing (machine) just spiked to the other side.

"I told him what I thought I'd seen and his eyes got really wide. He kinda freaked out."

The encounter with a ghost left Anapau feeling extra special for the rest of the day: "I felt so great and light and happy after that. It was a great experience. I walked out and I knew what everyone was feeling and was able to speak to them accordingly."