Kylie Jenner's family is furious with Tyga for 'disrespecting' her

Kylie Jenner's family reportedly think Tyga ''completely disrespected'' her in his new song, 'Stimulated' and the raunchy lyrics are ''so disgusting.'' 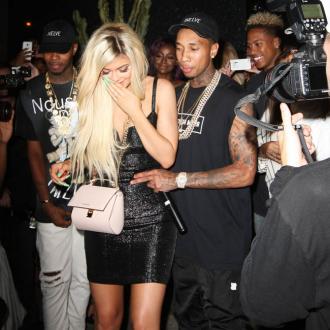 The 18-year-old reality TV star's parents, Caitlyn and Kris Jenner, and siblings are furious with her 25-year-old boyfriend for boasting about having sex with her on the track and have branded his raunchy lyrics are ''so disgusting.''

A source said: ''This is just so disgusting that the Kardashian family cannot even believe Tyga went there. Tyga knows not to discuss Kylie with anyone and then he goes and writes a song about having sex with her. It is just absolutely repulsive!''

''They say she young, I shoulda waited, she a big girl, dog, when she stimulated.''

The rapper recently joined Kylie and her family, including sisters Kim Kardashian West, Khloé and Kourtney Kardashian, on holiday in St. Bart's, but has now ''lost huge brownie points.''

The insider told gossip website RadarOnline.com: ''He was doing so well and getting along great with Kylie's sisters and parents and now he just lost huge brownie points because he completely disrespected her.''

The couple previously denied they were dating, but finally went public with their relationship after Kylie's 18th birthday earlier this month.