Review of Get Outta My Way Single by Kylie Minogue

Successful in having been the only female artist to have number one albums across four decades, it's obvious that Kylie Minogue is more than just a household name. An icon for some and a role model for survival for others, Kylie has been dominating the pop music scene, and thus the charts, for a very long time. And from her recent offering, it seems like this engine has not ran out of steam either. 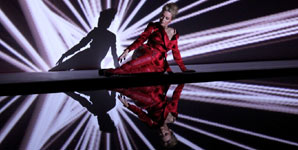 Get Outta My Way, the 2nd single from her hugely popular Aphrodite, is a flamboyant explosion of pop, synth and dance. With a thumping beat and a chorus that is as catchy as hell, this single is sure to carry on Kylie's string of triumphs. One may argue the song sounds a little dated (pop circa 90s) but Kylie is able to pull it off and make it sound as current as ever. Sticking faithfully to her roots in bubblegum pop, this may not cater to all tastes, but it sure to put a smile on even the faces of cynics. Wispy vocals and very suggestive lyrics such as 'I got a taste, I wanna explore' definitely confirms this as the perfect guilty pleasure.

This is a song that is sure to storm the commercial charts. Pumping within clubs and blaring out of car radios across the country, it really does seem like there is nothing that Kylie can't do. Without a doubt, it is camp and cheesy but Kylie, being well aware of it, is consciously trying to ignite a spark within a music culture which tries too hard to make itself look serious. Kylie claims that her frivolities 'happen if you ain't giving your girl what she needs'. Well, at least she's providing the humour and glamour that the music scene, and a lot of us these days, do truly need.