Kylie Minogue closed the closed the 20th Commonwealth Games in Glasgow last night (03.08.14) with a performance in front of 40,000 fans. 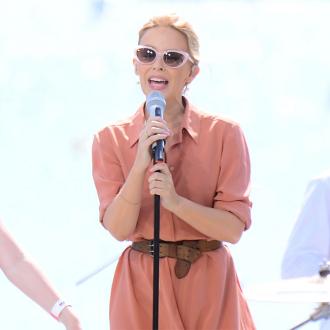 The 'Can't Get You Out of My Head' star brought the curtain down on the games in front of 40,000 fans, and passed the baton over to her native Australia, which will host the next games on its Gold Coast when they return in 2018.

Kylie opened her set with 2000 hit 'Spinning Around', and also performed tracks including 'Love at First Sight', 'All the Lovers' and one of her very first singles, 'The Locomotion'.

Toward the end of her set she told the crowd: ''So much beautiful energy here tonight.

''I admire your commitment, your passion so much and I'm so grateful to be here. Thank you so much.''

The show also saw performances from Scottish acts including Lulu and Deacon Blue.

Earlier in the day Kylie had shared a picture of her wearing a waterproof poncho, and joked about it with fans, writing on Twitter: ''Ahhh the glamour!! Ready to rehearse.''

Earlier in the games, Princes William and Harry and Duchess Catherine had attended and met with athletes, including sprinter Usain Bolt.