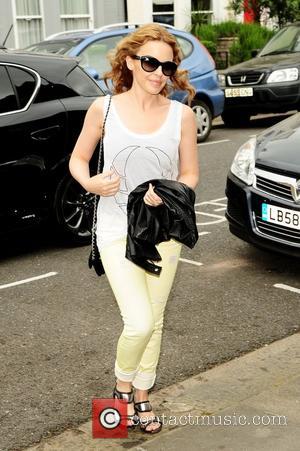 Kylie Minogue has confirmed she will perform with Jason Donovan at a London tribute concert in honour of legendary pop production team Stock Aitken Waterman.
Fans began speculating about a possible reunion between the duo at the star-studded gig this summer (12) after organisers announced a "very special duet", last performed 23 years ago, will form part of the show.
Now the Australian pop star has thrilled devotees by announcing she and Donovan will be sharing the stage for a rendition of their popular 1988 single Especially for You, which was penned by the songwriting trio - Mike Stock, Matt Aitken and Pete Waterman.
She says, "I'm going to sing Especially For You with Jason Donovan. I don't think we'll even need to sing it. I'm sure the audience all went through the Neighbours wedding. It's going to bring down the house - even though it's outdoors."
Minogue shot to fame in the 1980s on soap opera Neighbours, and her car mechanic character Charlene went on to marry Donovan's Scott Robinson - making them the show's golden couple.
The Hit Factory Live concert will take place in London's Hyde Park on 11 July (12) and proceeds from ticket sales will be donated to Cancer Research UK.