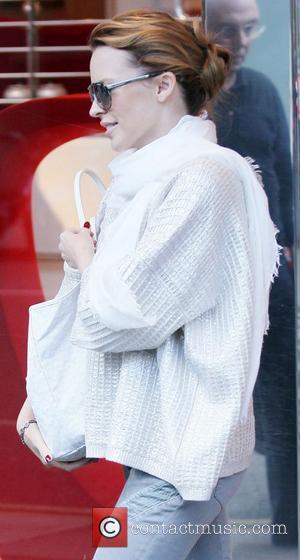 When Kylie Minogue hit the red carpet for the premiere of her new movie, she cut a dazzling figure in a stunning black sequinned Dolce & Gabbana gown. On Tuesday night (September 17, 2012), the UK premiere for Holy Motors took place at the Curzon Mayfair and the movie’s Aussie star made sure that she really stood out in her shimmering, floor-length frock. She finished the look off with smoky eye-shadow and dangling diamond earrings.

The movie, a French drama, also stars Denis Lavant, Edith Scob and Eva Mendes. After posing for photos on the red carpet, Kylie then “cosied up to director Leos Carax,” according to the Daily Mail. It’s a rare film role for Kylie; even though she started out as an actress – in Australian soaps such as Neighbours - she has spent the last twenty-five years focusing mainly on her music career. Speaking about her decision to take part in the movie, Kylie said “I’m always intrigued and enticed by that which I haven’t done, so… there was every reason to do it and no reason not to do it… it turned out to be one of the best experiences I’ve ever had.”

Kylie plays the role of Eva Grace (Jean) in the movie. She has her hair cropped short for the role, a far cry from the elegant long locks that she was sporting Tuesday night. There are no Kylie Minogue songs in the movie, though she does have a singing part. Holy Motors receives its general release in the UK on September 28, 2012.