Kylie Minogue has confessed she is shocked to still be able to do lingerie shoots while being in her late 40s but is happy to go with the flow. 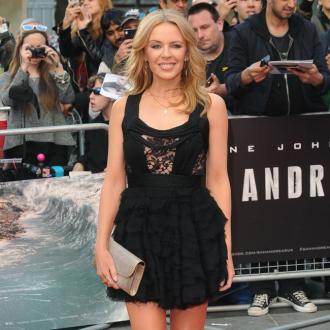 Kylie Minogue thinks it's ''astounding'' that she's still modelling lingerie at the age of 47.

The 'Spinning Around' hitmaker became a brand ambassador for underwear range Sloggi last September and is happy she can take on the role at her age.

She said: ''It's kind of astounding I'm still doing lingerie shoots but it's happening and I'm not forcing it. I'm just going with the flow.

''For me it's just about taste. There's a certain way to do things, I hope I get it right more often than I get it wrong.''

The 'Can't Get You Out of My Head' singer added that she sees a ''common ground'' between her and 56-year-old pop icon Madonna.

Kylie said: ''There's common ground for myself and Madonna there. I don't even take notice of how old my friends are. It's a sign of the times that age isn't that relevant. It's certainly not to me or my generation. Having said that, I'll be the first one to joke, 'Oh come on, I'm not in my undies again am I.''

Kylie admitted she has enjoyed her stint modelling the EverNew range from Sloggi so much that wants to make more time for fashion in her busy schedule.

She told The Daily Star newspaper: ''I love them! The styles and colours are perfect. They're so smooth and comfortable.

''That's the kind of thing I want to leave space for this year. I want to have time to do some different things.''