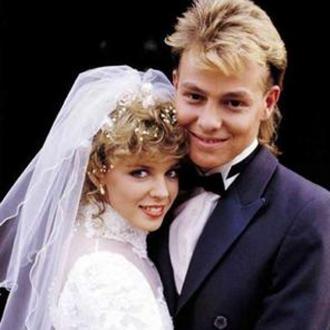 The 'Neighbours' co-stars - who had a hit in 1988 with duet 'Especially For You' - never confirmed their relationship while dating in the 80s, but Kylie says it ''made sense'' for them to go out as they were the only people who understood the fame and attention they were experiencing.

She explained: ''It started fictional, then we were dating. It was just so normal to us and such a precious thing we never wanted to say we were or we weren't, we kept it hazy.

''It made sense that we were together because it was a crazy time in our lives and we knew what each other was going through, there was that level of understanding.''

The pair shot to fame on Australian soap 'Neighbours' playing lovers Charlene Ramsey and Scott Robinson, and despite the popularity of the show, Kylie insists they didn't get much chance to experience the benefits of their success because they were working so hard.

Speaking on Radio 2, she said: ''There was maybe a few months after we started I realised we were becoming famous. We worked so much there wasn't much time to experience being famous. As years have gone by and everything has gone digital and paparazzi have gone crazy, it's more difficult. I think if I was in the same situation now, it would be much more difficult.''