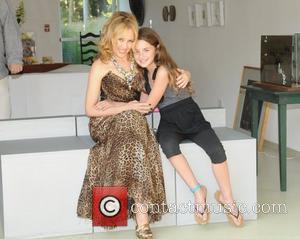 Kylie Minogue took to the stage with singer Rufus Wainwright for an unusual performance at a charity event in New York on Saturday night (28Aug10).
The pop star sang at the benefit show at the Hamptons Watermill Center and thrilled the star-studded audience, including Mark Ronson and Anjelica Huston, by duetting on a variety of her hits including Can't Get You Out of My Head.
The pair also performed If I Loved You from musical Carousel, before Wainwright closed the show with an emotional rendition of Over the Rainbow, which he dedicated to his late mother, folk singer Kate MCGarrigle, according to New York Post gossip column Page Six.

Kylie Minogue rules out move Down Under