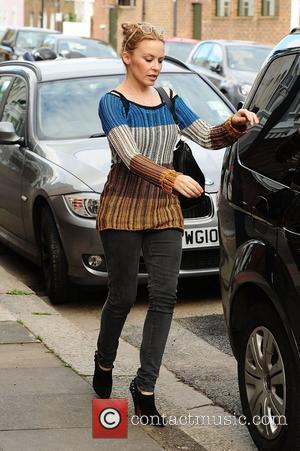 Picture: Kylie Minogue out and about in West London London, England - 04.07.12

A London show set to feature a Kylie Minogue and Jason Donovan reunion has been cancelled after the park venue was declared unfit for the concert.
The pop duo was preparing to sing its hit duet Especially For You at a tribute gig for music producers Stock Aitken and Waterman at Hyde Park on Wednesday (11Jul12), and Minogue uploaded a photo of the pair's rehearsal to her Twitter.com page on Monday (09Jul12).
However, organisers announced on Tuesday (10Jul12) that the Hit Factory Live event, which was also set to feature '80s stars including Sinitta and Bananarama, has been axed after heavy rain at the weekend's (07-08Jul12) Wireless Festival turned the site into a mudbath.
Bosses are undertaking a clean-up mission and have assured music fans that upcoming gigs by stars including Madonna and Bruce Springsteen will go ahead as planned.
A spokesman for the axed event's promoters says, "The moment the Wireless Festival ended, we put in place a massive plan to prepare the site for tomorrow. Eight thousand cubic metres of wood chip is currently being put in place and over the past 24 hours crews have started to make the site safe for our customers.
"Despite best efforts, time has beaten us, but I want to reassure (fans) that Hard Rock Calling concerts with Soundgarden, Bruce Springsteen and Paul Simon, plus Madonna on 17 July and the BT London Live (Olympics) Opening Ceremony Celebration concert and the events will go ahead."
The concert was planned to celebrate the 25th anniversary of the Pwl record label, home of pop producers Mike Stock, Matt Aitken and Pete Waterman.
In a post on her website, Minogue writes, "I am so sorry to hear that the concert tomorrow had to be cancelled. I feel for all the fans who had bought tickets to this special event. Jason and I were rehearsed and excited to share this moment with everyone."
Donovan adds on his Twitter.com page, "What can I say... we are all extremely disappointed. We appreciate that you all must be extremely frustrated but please bear in mind that this decision was not taken lightly. Can't believe it... Was really looking forward to celebrating the wonderful work of Mike Matt and Pete and all who made those songs so special to a generation!"