This Means War! Kylie Challenges Pippa To 'Battle Of The Bums' 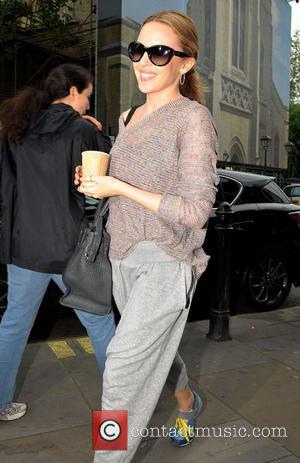 44-year-old pop princess Kylie Minogue has challenged Pippa Middleton to a battle of the bums to celebrate the Queen's Diamond Jubilee on Monday (June 2, 2012). Pippa, 28, almost stole the limelight from sister Kate Middleton at the Royal Wedding in April 2011 in a figure hugging dress.

However, when asked by comic Alan Carr whether she would consider a "bum-off" with Pippa, Kylie said, "I'm going to have to.I'll definitely have to (bend over and) pick something up off the ground". Kylie - wearing a hot pink mini-dress - then leaned over, to send out a warning signal to rival Pippa. Meanwhile, the Aussie singer admits she is a little nervous to be singing in front of the Royal Family at the concert on Monday, saying, "I can't tell you too much about the performance, but what I can say is I'm doing a medley". Others confirmed to perform in London on Monday include Cheryl Cole, Sir Paul McCartney, Sir Elton John, Sir Tom Jones, Robbie Williams and Madness.

Later in her chat with Alan Carr, Kylie revealed her sister Danni Minogue's embarrassment after her affair with Simon Cowell was revealed in a recent biography. Kylie said, "My sister has been through a lot worse - but she's busy with my nephew Ethan who's adorable"