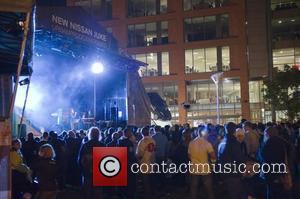 La Roux star ELLY JACKSON has become the latest star to slam TV singing contests - insisting she "will not support" them because they are "unfair" on "vulnerable" wannabes.
Sir Elton John recently branded Simon Cowell's talent programmes "boring" and "brain crippling", while former Spice Girl Melanie Chisholm criticised shows such as American Idol and The X Factor for overexposing the contestants.
Now Jackson has spoken out against reality competitions, insisting the experience of overnight fame is too much for newcomers like Susan Boyle, who famously broke down following her rise to fame on Britain's Got Talent last year (09).
She tells Britain's OK! magazine, "I can't stand it (The X Factor). I don't think it's fair on people, it puts them in a very vulnerable position in front of millions of people.
"For example, the Susan Boyle situation was unfair. She came from the middle of nowhere, she'd never seen that many people before. It's like going from nothing to flashing lights. It's not okay to throw someone into that situation without any kind of experience or training.
"We all know it's a massive moneymaking machine, it's not about finding musical talent. I will not support it."