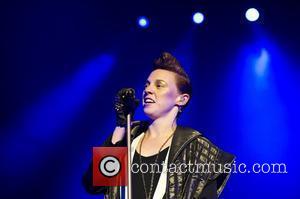 La Roux singer ELLY JACKSON is constantly surprised by the band's success - she never expects an audience to show up at their concerts.
The British star shot to fame with the release of hit track Bulletproof last year (09), but she admits she's still stunned to be able to perform at sold-out shows - especially famed music festivals such as Glastonbury and Coachella.
She tells Britain's Independent newspaper, "Last year, on the weekend that Bulletproof was number one, I had Glastonbury to play. Nobody could have convinced me that there was going to be anybody at that gig. I thought, 'No one knows who we are. This is Glastonbury. Maybe somebody knows who we are in (London district) Hoxton. No one's going to turn up, I'm going to look like an idiot, and I'm so nervous.' And there were 10,000 people there.
"I did that at every single festival all of last year and, still, this year. At Coachella recently, I thought, 'There's not going to be anyone there,' and there always is. I feel that if I always think the worst, I won't be disappointed."